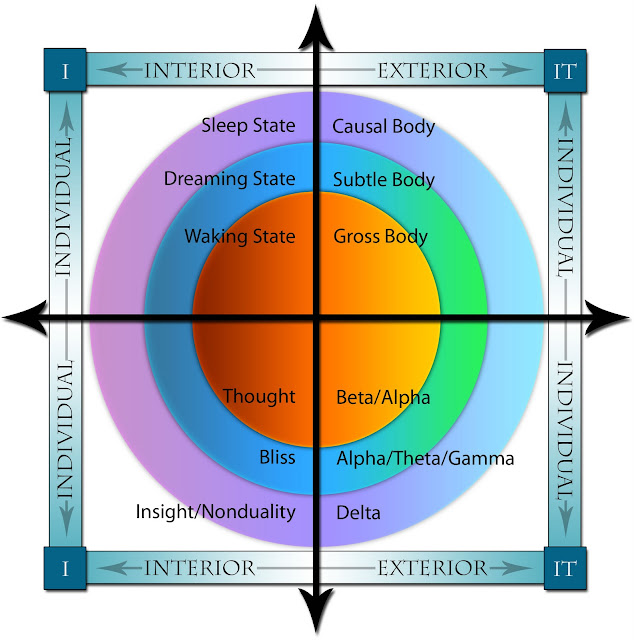 The four brainwave patterns most often studied in science (Beta, Alpha, Theta, Delta) represent states of waking, dreaming and sleeping through which we pass every 24 hours. While all brainwave patterns are usually present throughout the day, Beta activity is dominant during the waking state. Alpha and Theta appear as we become relaxed and drowsy, and Delta emerges as we descend into deep, dreamless sleep.

In phenomenological terms, on some level we move through and experience a spectrum of consciousness as we descend through the sleep cycle, ranging from the gross to the subtle to the very subtle. Beta-band activity is experienced as a gross, dense level of consciousness, whereas Alpha and Theta co-arise with a more subtle form of consciousness in which vivid imagery and a sense of letting go come to the surface. This is a world in which long forgotten childhood images come into view and the gross laws of nature cease to exist. Finally, the self-identified witness—the “I”—vanishes as Delta activity comes online in deep, dreamless sleep. In this state, there is no one experiencing anything, no one struggling with the world, no one who is happy or sad; there is only perfect peace and rest. Not incidentally, this state is crucial to our continued health and wellbeing, as it deeply recharges our innate capacity for healing and rejuvenation.

Interestingly, the teachings of certain Buddhist and Hindu traditions also depict a field of consciousness that ranges from the gross to the subtle to the very subtle, each state having its own body—gross, subtle or very subtle (i.e., causal). Furthermore, the gross body is contained within the subtle body and the subtle body within the causal body, so that the emergence of the non-self-identified witness is an ever-present possibility. In other words, these co-arising state-body manifestations represent aspects of ourselves that we can develop, allowing more of our potential to come to the surface.

This teaching of a tripartite self (with corresponding states and bodies) is seen in Buddhist, Hindu and even Christian teachings, though the specifics of the teaching differ from tradition to tradition. The Trikaya doctrine in Mahayana Buddhism delineates the nature of an enlightened being, consisting of three bodies: 1) a created physical body which emerges in time and space; 2) a body of light; and 3) a boundless Truth body, the incarnation of the enlightenment principle. The Hindu philosophical tradition of Vedanta refers to these three bodies as the gross body, the subtle body and the causal body. And the Christian tradition acknowledges these three bodies/states in its doctrine of the Trinity—God in three persons: Father (causal), Son (gross) and Holy Ghost (subtle).

As we become more acquainted with these teachings, it is possible to cultivate a sense of how we can inhabit these states not only in a more conscious way, but in a way that lends itself toward transformation and renewal, towards releasing our habitual self-identifications and realizing our deepest nature. In fact, Vedanta views the investigation (both mentally and experientially) of these states and bodies as essential to releasing our habitual identification with them and resting in our true nature.