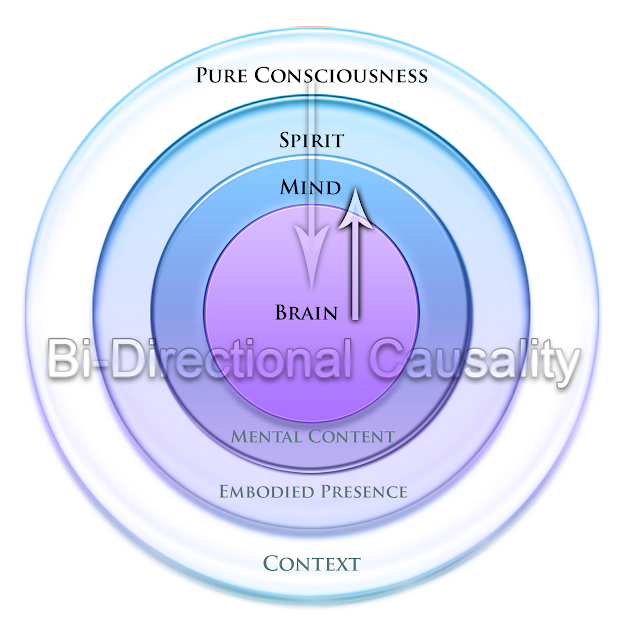 Ever since the emergence of behaviorism, the trend to interpret the material world as being primary and the world of conscious awareness as being secondary (and therefore without the capacity for causation) has increased steadily and rapidly. The wisdom traditions, on the other hand, have usually maintained that the intangible world of spirit is primary. The struggle to understand how the mental and material worlds are related has been visited again and again by some the world’s greatest intellectuals and spiritual luminaries, and is commonly referred to in philosophy as the mind-body problem.

As science has progressed over the ages and repeatedly demonstrated the inaccuracy of many of the belief systems long held by the world’s wisdom traditions, it has only been natural to assume that the notion of a world consisting of something as intangible as pure consciousness must also be wrong. As such, the behavioral neuroscientific community more often than not reduces not only all mental phenomena but conscious awareness itself to neurological functioning, giving virtually all authority to the brain and denying the power of influence to the consciousness that inhabits the brain. By adhering so adamantly to such an interpretation, it has been my experience that our inherent capacity to evolve our brains remains malnourished, leaving countless people feeling hopeless and frustrated. This is particularly the case when such individuals either do not have access to proper psychiatric care or do not respond well to the medication typically administered for their conditions.

Over the last 20 years, science has discovered how deeply the human brain is impacted by both human experience and the environment, and not only early in life but throughout the lifespan as well. This new understanding of the brain’s capacity to change and develop, often referred to as neuroplasticity, offers new inroads to personal development that once seemed impossible. According to Sharon Begley (2007), by making the best possible use of brain plasticity through the intentional training of conscious awareness, “the goal is not merely the absence of mental illness, which seems to be all that psychiatric and psychological therapies strive for these days, but the enduring presence of robust mental and emotional health” (p. 221, emphasis mine).

The research on neuroplasticity clearly shows that specific kinds of mental training can influence how our brains operate, strongly implying that our emotional and mental wellbeing can indeed be cultivated through mental discipline; that is, through the development of awareness and the evolution of consciousness.

The evidence seems clear: Our Individual emotional set-points can be shifted toward higher levels of wellbeing. Conventional psychiatry, on the other hand, typically approaches treatment by treating the symptoms of mental and emotional discomfort through psychopharmacology, without necessarily addressing the deeper, causal issues behind such discomfort.

The conventional emphasis, as such, seems to be on the manipulation of neurotransmitters to alleviate symptoms, relegating the people who are suffering from such discomfort to the role of victims of brain chemistry and physiology, sentenced as it were to rely for the rest of their lives solely upon psychopharmacology for any hope of future relief. Furthermore, such medication often requires additional medication to counteract its own distressing side effects.

Before I go any further, please allow me to be very clear: I’m not against psychopharmacology, psychiatry, or the use of medication. The development and use of such medication has greatly contributed to the world in which we live, and has positively contributed to my own well being more than once. While the use of psychopharmacology is often necessary in the short-term treatment of symptoms (and in some cases may actually be necessary for long-term treatment), it is by itself quite limited at offering long-term treatment with the potential of teaching the brain new and healthy neurological habits. The cultivation of conscious awareness through meditation and mindfulness, on the other hand, are capable of such long-term treatment.

A spiritual interpretation of contemplative neuroscience agrees with the basic view that biology plays a role in causation. Many of the thoughts and feelings experienced in our daily lives are indeed the result of habitual neural processes. However, the spiritual view of contemplative neuroscience sees causation between the brain and mind as not merely uni-directional but bidirectional. As such, this view acknowledges the capacity of conscious awareness to influence and change the brain, particularly when it is systematically and consistently trained over long periods of time.

By granting the world of consciousness its own reality, the spiritual view of contemplative neuroscience offers a scientific worldview capable of radically changing what we believe is possible for our lives and the lives of future generations.

Posted in Spiritual Development
← Action Of Nerves Is Based On Sound Pulses, Anesthetics Research ShowsDelta Meditation in Tradition and Science →