I was recently in the Bay Area to teach a class on Addiction Studies. When my class and I did our first meditation together, we sank into a very deep meditative state, one which we could all really feel. When you meditate in a group, there is a definite field of energy, a palpable coming together, especially when you have been doing the Profound Meditation Program for a number of years. It is a very interesting and very powerful experience.

When I was in graduate school at John F. Kennedy University, studying transpersonal psychology, I was taught that there is an introvert and extrovert continuum. On the one extreme is the introvert; someone who gets refueled and rejuiced by being by alone. The extrovert is a person who gets refueled by being with other people. Well, I tend much more toward the introversion aspect. I tend to isolate and need a lot of alone time. But a good friend of ours, a teacher of the Enneagram, says that those of us who are introverts need to cultivate community, and those of us who are extroverts need to cultivate solitude. Carl Jung said that God comes through the inferior functions. So in those areas where we seem to be the most challenged, often we will make the biggest transformational breakthroughs.

Having said that, after I had met with a lot of people and done a lot of activities in the Bay Area, I found a little room in a little beach town and spent a couple of days on the coast. I spent a long time in meditation, and went running on the beach, which I completely love. My routine is to put on a Profound Meditation track and run for a half hour out and a half hour back. It’s a really profound experience.

During this time, something happened with some people I was working with. It was kind of difficult; but difficult doesn’t mean it was bad, it was just difficult. I won’t get into specifics; it was about a lack of trust. It felt very painful to be suspected of doing something that wasn’t there. There was some fear, some paranoia, and some misperception. So far in my professional career, I’d never really gone into anything like this, because it hadn’t been an issue. But it was an issue now. It really hurt and my heart was very heavy. The feeling in my body was like the nauseous feeling you get when you’ve been falsely accused of something. You check in with yourself, to see if you acted with integrity or not, but either way it still feels bad.

I thought about how I teach and work and coach people about this stuff all the time. One of my old sayings is, “When you point a finger at someone, you have three coming back at you.” So, I thought, “Okay, so what do I do? I just sit with this pain and the hurt in my heart. And I did.

For a couple of days I meditated for about three hours a day, just being with this thing, and then it shifted. I came to a place of total acceptance. This took about a day and a half, maybe two days of work. Sometimes I just can’t release these things immediately. Sometimes I don’t think they need to be released immediately. I think they need to hang around to do whatever they need to do. We think, “I’ve got to get rid of this negative feeling, quick-release it, so that I can go on and be happy.” No, sometimes these things need to percolate, to purify, in order to do their work.

My first night there I went out to a nice little seafood restaurant. I was eating my dinner and reading a book, and there were conversations all around me. One table was full of Hollywood film industry people, with their distinct L.A. vibe, and behind me were some people that had been to a workshop, talking a New Age-y, psychology jargon, who were distracting me from my book. I was getting irritated.

I finished my meal, and as I was walking back to my room, I was annoyed at the way that our egos and whatnot get in the way of what is real; they get in the way of our depth and get in the way of God, if you will. I started thinking of all the ways that I do the same thing with my ego. At that point, all my resentments and irritation just dissolved into a field of compassion for myself, for others, and for our struggles. It was quite beautiful.

On top of that, I kept present with this other issue that I was allowing to be there. And eventually I came through it to a place of real peace. No matter how bad the suffering gets, we just need to stay present with it and allow ourselves to be with it―and not, as Robert Augustus Masters writes inSpiritual Bypassing, try to get quickly past the pain, past the darkness, over to the light, and blow off the other stuff. We simply need to go through it.

I’ve known that for years, cognitively and experientially, but it’s a lesson that keeps re-teaching itself. Every time I have another encounter with it, I find it amazing. I’m so grateful not only to have this knowing but also for the number of books that have been written about it; in fact, I found one at the little bed and breakfast I was staying at. It was written by someone in 1995, talking about his enlightenment, and basically describing the exact same thing. Being present with what is, letting it release, and going through the pain into essence. Rather remarkable. And now we have this technology that makes it even more powerful. It just brings it on. 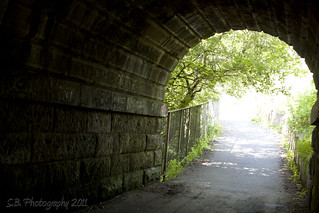 What I was left with from the whole experience  was that there really is hope, and that the hope  is found in our deepest selves, which are our best selves. The more we cultivate that in our daily practice, and surrender to it, the more we will become the kind of beings that we need to be in order to move on to the next levels of the human adventure―evolving into more compassionate, complex, beautiful, interesting, connected, alive, and more conscious creatures.